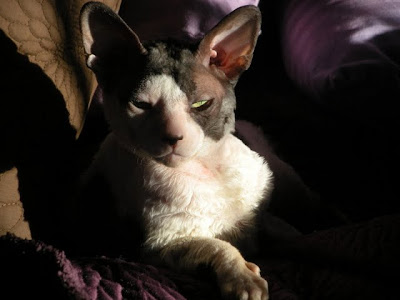 I don't use this blog much anymore since I am having so much fun with Steampunk Addie.

Sixteen months ago a woman found a Cornish Rex male in the Tucson desert. He was cold and shivering as well as wet from a storm. 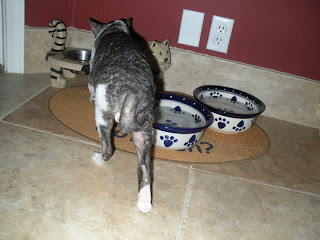 He also had a deformed tail which curled like a snail.

She brought him back to Phoenix and contacted me. I can't remember if she took Curley (as she called him) to the vet first or if I did, but he had several stubborn infections.
Several rounds of antibiotics later (as well as neutering!) he went to Fountain Hills to live with a dear friend and another one of my former foster Cornies, Habanero.
Now named Mezcal, he lived in the lap of luxury. She took him to the vet and fed him deli chicken. She sent me regular photos. For 16 months he lived the good life.
And today he was found dead.
I was not expecting that when she called me. When I heard the tears in her voice I expected her to say Habanero had died.
Not our little Mezcal.
Rest in Peace, Mezcal, for you were loved.
And still are.
Posted by Greta Huls at 1:21 PM No comments:

What a way to ruin what was probably a perfectly good Ti Kuan Yin Oolong. I don't know if it's a good Ti Kuan Yin or not since the fruit overpowered any tea flavor. It only lasted one or two brewings, not the multiple I expect from a good oolong. I'd call this a tisane not an oolong.

Posted by Greta Huls at 9:23 AM No comments:

What's a girl to do when she's nuts about the holidays but works for a bishop who is adamant about the separation of Advent and Christmas?

I love the holidays. Starting with Halloween and ending with Epiphany on Jan. 6 (I celebrate Christmas for as long as possible!) I get all sentimental and happy. I decorate for each holiday and wear annoying holiday-themed clothes and jewelry. 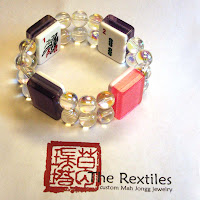 I was contemplating the first Sunday of Advent, which is a season of waiting and preparation, in church Sunday and I thought about Advent wreaths. My eye fell upon my Mah Jongg bracelet and I had an early Epiphany. An Advent bracelet!

I went home had chose three purple tiles and one pink tile. (The pink tile is for the third Sunday in Advent which traditionally is rose or pink in honor of Mary or Gaudete Sunday.) I paired them with large 12mm crystal rounds. I'm quite pleased with it and version of this will be available in my Etsy shop. 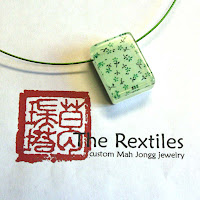 I drilled a necklace last night for a customer who bought an Ivory-colored Mah Jongg tile on 18inch silver cable choker but asked if I had any Flower tiles instead. I found, and she approved, a Flower tile on a green flower-backed tile. I paired it with a green cable since it added to both sides beautifully.

Finally, I made a cute red and green checked bracelet similar to what Mom did in August but forgot to photograph it. Oops. Three green-checked tiles alternate with three red-checked tiles. This can be worn year round but I admit I had Christmas in mind as I made it.

Posted by Greta Huls at 9:14 PM No comments:

Phew! Now that I've had a chance to catch my breath, I realized it's been two months since I last posted! Not that I've been lounging around. I've been to the emergency room (twice in one day!), helped host the Episcopal House of Bishops (including a trip to Mexico), staffed our annual Diocesan Convention, had a flu-like illness, AND gave myself a concussion!

In between all that I have managed to sneak in a few craft projects.... 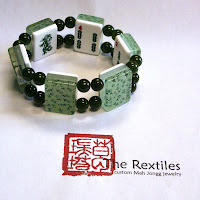 First of all, I created this Betsy Ray bracelet while thinking about my favorite kidlit author, Maud Hart Lovelace. While I don't know if she ever play mah jongg, the tiny green print on this set makes me think of her and the old-fashioned wallpaper that might have adorned the rooms of her or her friends. And it's green which was her favorite color! So I chose her birthdate, 4/25/92 and added a green dragon since 1892 was the year of the dragon. The beads I chose are 10mm jade since Maud mentions jade so often in her Betsy-Tacy books. It's available in my Etsy shop. 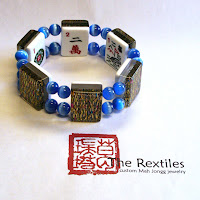 I made this Golden Anniversary bracelet in honor of my parents' upcoming 50th anniversary. We love the colorful gold confetti mah jongg tiles and Mom paired it with the 10mm blue fiber optic rounds since it picks up one of the many colors in the tiles. Personalized versions of this are available in my Etsy shop. 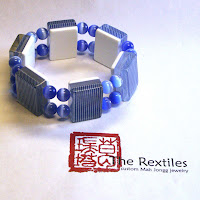 I got two lots of blank mah jong tiles which I thought would be fun for jewelry - and they are! The first is a blue-striped Mah Jongg bracelet with 10mm powder blue fiber optic rounds, although white would work well, too. It's available in my Etsy shop. 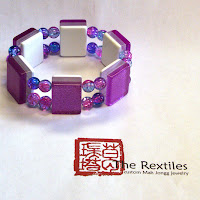 I also got these lavender mah jongg tiles and paired them with cracked blue and lavender resin beads of slightly differing sizes. It's fun and makes me smile. It's available in my Etsy shop. 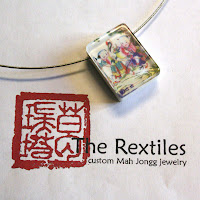 Finally, two necklaces. The first is a set I've admired for awhile so I was delighted when one appeared in a mixed lot I bought. It features two traditionally dressed Chinese children in a colorful print. I plan to keep this one, but if I get enough requests I can buy a set and make more. It's on a 20 inch steel cable necklace with a magnetic clasp. 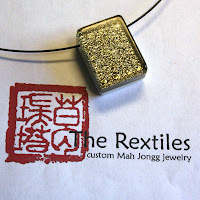 I also made an elegant necklace from a single gold and black glitter tile on a 20 inch black steel cable necklace with a magnetic clasp. There's another that's black with a faint glittering in it like stars but I'll have to shoot that another day.

I need to make up some new bracelets on 9 inch steel cables which will match the necklaces. Look for those soon! (Seven inch cables are also available but I personally think they'll be too small for anyone to wear after stringing a tile on it.)

I also intend to make more Christmas items, such as my Gingerbread bracelets.

My friend Jennifer taught me to crochet this fall, thanks Jen! Once I get the hang of it I can't wait to try some felting.

Click on any photo to see it larger.
Posted by Greta Huls at 9:35 PM No comments:

Do you lilac these? 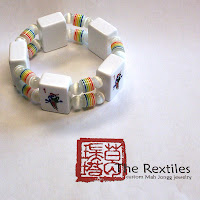 Just a couple more to show you tonight. First I drilled white Mah Jongg tiles and strung them with 10mm rainbow-and-white-striped roller beads and 10mm white fiber optics rounds. Adding the rounds helps the roller beads lay better so I'll attempt to do the same with yesterday's black bracelet as soon as I get more black beads. 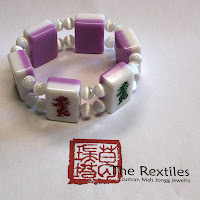 I then drilled these lilac and white Mah Jongg tiles and after much looking decided I liked them best with the 10mm white fiber optic rounds.

I need to get into some fall type bracelets but they'll have to wait a bit since I've got a major work commitment Sept. 13-21. The bishops are coming! That's right, The Episcopal Diocese of Arizona is hosting The Episcopal Church's House of Bishops. More than 200 bishops and their spouses and partners will be here.

It's a good thing I love the color purple, right?
Posted by Greta Huls at 9:45 PM No comments:

I haven't been able to do any drilling since last Thursday due to two emergency room adventures, but I'm slowly getting back up to speed and thought I'd share two of the items I've worked on. 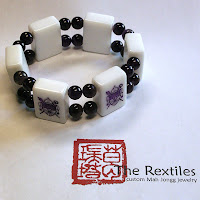 First of all is a custom Trinity Cathedral bracelet I did last Thursday as a prospectus for the Dean after he showed interest in the Diocesan one I did a few weeks ago. I had white Mah Jongg tiles engraved with the Cathedral's crest and strung it with amethyst beads. (Purple is the cathedral's color since it's the Bishop's see, or seat, and the Bishop's ring is traditionally made of amethyst. It's also why bishops wear purple shirts and vestments.)

He liked it and showed it to the Cathedral Shoppe manager. After some discussion we're going to try stocking a few things such as bracelets, necklaces, key chains, and a bolo tie and see how they do. 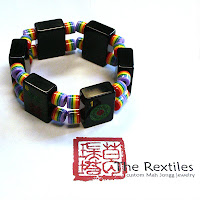 Tonight was the first time I felt up for using my drill press so I drilled some black Mah Jongg tiles with primary engraving and strung them with 10mm rainbow roller beads. I'm delighted with the colors but the roller beads don't lay as smoothly as I'd like, so I'll be experimenting with them. I plan something similar with white tiles and rainbow roller beads with white spacing between the stripes. Both black and white versions will be available in my Etsy shop with personalization available. 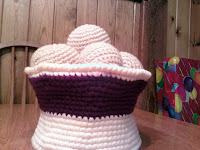 I also tried to drill some chopsticks for my lovely noodle hat but both broke so I'll have to experiment with that when I have both the time and energy.
Posted by Greta Huls at 8:51 PM No comments:

I had yet another productive weekend, although I didn't get much drilling done.

Friday afternoon I stopped by a small local salon and boutique in Scottsdale called S.tylers of 5th Ave. A friend told them about my jewelry and the owner asked me to stop by. They loved what I have and put 11 bracelets and four necklaces on consignment! 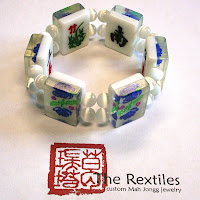 So I got busy, after making Mom a Patriotic bracelet. She didn't realize the one I had made was a sale item and had been looking for it so I made her one of her own. Using 7-4-1-7-7-6 (Character?) tiles I made it with red stripes and royal blue beads.

That done, I had to get busy making new items so I started stringing some floral Mah Jongg beads I had. This has been a favorite bracelet of mine for years so I was delighted to find more online. I thought they were drilled tiles but after getting them I think they are just really good beads. Who knows. 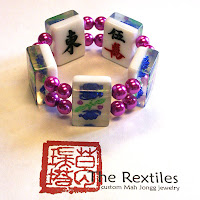 First I made another bracelet like mine (six tiles) with 10mm white fiber optic beads. This is on Etsy. 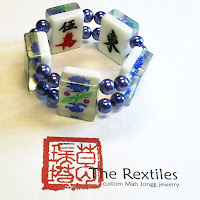 I also made some with 10mm magenta, blue and green glass pearls, which pick up the three colors in the floral tiles. All are in my Etsy shop.

These are really festive but only the green and white beaded bracelets are truly reversible since the magenta and blue don't match the faces.

Saturday was busy with various events so I didn't string or drill anything! However, I was able to give my future sister-in-law her personalized bracelet for her birthday celebration and she seemed very pleased. 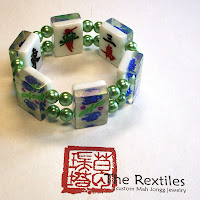 Tonight I made more floral bracelets and drilled my four final black Rexphiles logo tiles and strung them with two 20mm twisty black cinnabar beads between each. It's stunning but you'll have to wait to see it since I forgot that to shoot that one.

Monday I need to get busy with gift boxes and tags. And restring a butterfly bracelet for the shop owner's granddaughter. 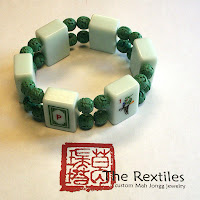 Oh! And here's the ice-blue bracelet I did last week for Mom with the 11mm sea-green cinnabar beads.
Posted by Greta Huls at 10:12 PM No comments: